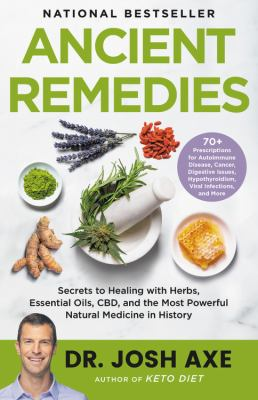 Reviewed By: Gretchen
Find it at MRL:
https://mrll.ent.sirsi.net/client/en_US/default/search/results?qu=ancient+remedies&te=

Brand new on the library shelves is Ancient Remedies by Dr. Josh Axe. Dr. Axe uses Ayurvedic and Traditional Chinese Medicine in his latest book as the basis for his guides on getting healthy and staying healthy.  For those not familiar with this approach, both methods focus on the use of food as a vehicle for medicine and healing rather than the western traditional model focusing on pharmacology. Dr. Axe addresses the angle that, while pharmaceuticals have their use, they are not ideal for healing, but only for addressing the symptoms short term.  A case in point in his first chapter is opioid addiction and antibiotic resistance which he says, “is only the tip of the iceberg”.

He illustrates how his mother’s second bout with cancer was what led him to explore other models of health when it became clear that conventional western medicine was not showing results. As he so aptly points out in the beginning, we are a culture on prescription drugs, with higher than ever rates of obesity, heart disease, cancer, and diabetes. Clearly, something is not working.  Neither the pharmaceutical not the nutritional model we are currently using, he maintains, are getting the results our modern world so desperately needs.

In chapter one – Ancient Medicine for a Modern World -he advocates treating the root cause and not only the symptoms. Healing methods that he promotes include, meditation, acupuncture and CBD oil among other things. Above any of these, he advocates for a healthful diet, which includes a diet high in vegetables and pastured, grass-fed meat, herbs and bone broth.

In chapter two – Curing the Root Cause – he introduces us to the concept of Ayurvedic and Traditional Chinese medicine (hereafter abbreviated as TCM).  Both methods treat disease as an imbalance in the system and “aim to cure the root cause of the disease by healing one’s thoughts, beliefs and lifestyle habits with strategies like diet, stress reduction, and herbal remedies that bring he body into balance”.

In chapter three – Eat right for your Ancient Element – he outlines how with TCM, foods are either cooling and contracting (Yin) or hating and expanding (Yang).  He teaches the reader to differentiate the balance in their own bodies and to self-diagnose one’s qi (energy) with the appearance of the tongue (a very old method). In addition, he divides human physiology into five elements – fire, earth, wood, metal, and water.

In the ensuing chapters he discusses the foundation of pairing your food choices, eating fermented food and of course elimination harmful inflammatory foods such as sugar, processed oils, and refined grains.

For some, Part Three – Your Ancient Pharmacy may be controversial as he discusses the medicinal use of cannabis (though to be clear, he looks most at the non-THC components of hemp and CBD), essential oils, and emotional and spiritual aspects of healing, such as meditation. He also delves into many practices that have become mainstream, such as yoga, digital fasting and get out in nature.   Additionally, he discusses planning your schedule according to the TCM timetable in which certain activities are more beneficial at certain times according to the function of your biological rhythms.

The second half the book is split into two categories:  Prescription for 70+ Conditions and a recipe guide for those looking to incorporate healing foods into their diet.  Each condition is given a small amount of space outlining foods that help and foods that harm. “Let thy food be thy medicine and medicine be thy food”, is ascribed to the famous Hippocrates in 400 BCE. This too is the maxim of Dr. Axe.  With recipes such as Detox Soup and Arugula Salad with Baked Pear and Goat Cheese, there are many choices to inspire someone attempting to get their health on track.

In short, Ancient Remedies is an enjoyable read and I gained a lot from reading it. However, I was already open to the idea of TCM and Ayurveda.  Is it for everyone? No. Not everyone is prepared to take their health to this level, nor is everyone willing or prepared to learn to cook differently of maintain a strict regimen while abstaining from old standbys of a Western diet such as refined grains, sugars and takeout. But for those looking for a fresh new approach that might not be so new after all, Dr. Josh Axe’s take on TCM, might just be what they are looking for.   It is available in regular and large print.