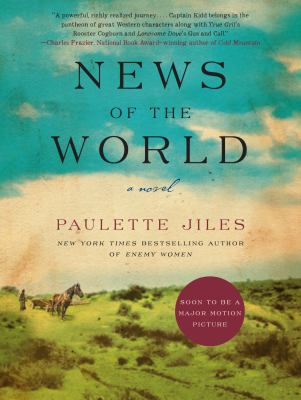 Review of News of the World by Paulette Jiles

Reviewed By: Gretchen
Find it at MRL: https://mrll.ent.sirsi.net/client/en_US/default/search/results?qu=news+of+the+world&te=

News of the World is by bestselling author Paulette Jiles, a story set in Reconstruction-era Texas and based on real life events.

It is by turns moving and brutally jarring, a tale as much about the journey of the human heart as that of the open road. Captain Jefferson Kidd is a veteran of the War of 1812, engaged in his first bloody battle when only sixteen years old. Now an old man, he travels the still wild Texas in a wagon, going from town to town with his newspapers, reading of the far-off Franko-Prussian War, the news of fashionable London, the tide of Irish immigrants into New York City. His newspapers provide a window to the world beyond, to those who have no access to the newspapers or who may not even be able to read them. He conducts his readings for a dime a head in the local Masonic lodges or the town dance hall, his refined, melodic voice and his elderly, wise appearance lending gravity to his reading.

He is approached in Wichita Falls with an offer of a fifty-dollar gold piece (a fair sum in those times) to return a young ten-year-old girl, Johanna to her relatives near San Antonio. She is the daughter of German immigrants who were slaughtered by Kiowa when she was a mere six years old. Raised by the Kiowa, she has no memory of her German family, no memory of her mother tongue. Forced to wear dresses and conform to standards now foreign to her, she is wild and unruly. He agrees to make the long journey through wild and unsettled terrain with the girl. At first there is an uneasy truce between them, an unlikely old man with white hair and a young, blue eyed Kiowa girl. They must make their way, four hundred miles through a land inhabited with violent men, both white and red, a lawless and corrupt Reconstructionist government, fraught with political upheaval and hatred and anger on every side.

As they eat away the weary miles, a bond develops between them. He is an honorable man, patient and kind and determined to do what is right. She begins to trust him and quickly begins to pick up English from him. She calls him by turns Kep-dun – Captain and Kontah – Grandfather. Though wild, her sprightly demeanor and her lively intelligence endear her to him. He comes to lean on her as much as she on him.

But even when they approach their destination, there is little solace for young Johanna. No love or kindness awaits her. And Captain Jefferson Kidd must again decide on the right thing to do.

I learned a lot about Reconstructionist Texas while reading this novel. Texas was under U.S. martial law after the war, and all owning and carrying of handguns was forbidden. Of course, this did not prevent lawlessness out on the frontier, and in fact paved the way for anarchy and brutality upon the innocent and defenseless.

It is beautifully researched and movingly written. The author has an unusual style in that she completely eschews the use of quotation marks, which made it difficult to get used to the dialogue. Once I did, however, the story rolled smoothly. The writing is evocative and haunting, the characters splash onto the page, larger than life.  It is a story that reveals the condition of the human heart and the loyalty that lies therein. It reveals wounds torn afresh and healed anew. I highly recommend it.