Morrisson-Reeves Library is one of the oldest public libraries in the state of Indiana. Opening in 1864, the library’s benefactor was one of Richmond’s earliest prominent citizens, Robert Morrisson.

The city of Richmond made several attempts to establish a library prior to 1864. As early as 1822 notices appeared from time to time in the local newspapers announcing meetings of various library boards, shareholders, and the like. In 1855 Wayne Township established a library with township funds and contributions (including $500 from Robert Morrisson). Located on the third floor of the Wiggins building, near 5th and Main, it was open only five hours a week.

As part of his last will and testiment, Robert Morrisson decided to create a library for his friends and neighbors, but instead of waiting until after his death, he began the process immediately. He spent $12,000 for the lot at the corner of what is now North A and 6th Streets and the brick building which was erected there. He gave an additional $5,000 to a library committee with which to buy books. The new institution was duly named the Morrisson Library, and it opened on July 30, 1864, 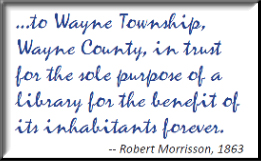 with approximately 6,000 books. Perhaps the inaccessibility and short hours of the Township Library prompted Morrisson to make the gift, but it is certain he wanted it to be a lasting gift. He gave the donation “to Wayne Township, Wayne County, in trust for the sole purpose of a library for the benefit of its inhabitants forever.”

In January 1893, Caroline Middleton Reeves, widow of Mark E. Reeves, donated $30,000 to the library. Mark Reeves was a prominent merchant and banker, who as a young man had worked for Robert Morrisson. He and his brother, James, organized and operated the First National Bank. Mrs. Reeves made the donation to memorialize her husband and her son, Arthur Middleton Reeves, who had died in a train accident near Hagerstown in 1891.

By the late 1960s, it became apparent that the much-loved building, built by Mr. Morrisson and renovated by Mrs. Reeves, was no longer practical. Its design was not conducive to modern library practices, and its age made further maintenance costs prohibitive. Librarian, Mrs. Harriet E. Bard, worked tirelessly with architects to fashion the best possible library configuration, even spending a summer taking a class on library buildings. The result of her effort is the present 52,800 square foot building that is modern enough to accommodate all of the changes that have taken place since 1975, yet retains a feel for the past. Even though the old building was demolished, many architectural and furnishing pieces were salvaged and incorporated into the current building.

Architectural links from the past give our library a unique and distinctive charm. Memorable objects from the 1864 and 1893 library buildings are tastefully incorporated throughout the library, both inside and out.

The Historic Courtyard is visible from the Library’s front entrance ramp and the Harriet E. Bard Meeting Room. Several architectural items from the earlier building have been installed in this quiet garden space.

Elements salvaged from the facade of the old building include the top pediment, window mullions, “Morrisson-Reeves Library” sign, marble columns, and decorative lintel from above the front door.

Among the various pillars and architectural elements in the courtyard is the beloved Bimbo Memorial Fountain. The unique gift was given by the William Dudley Foulke family in memory of their dog, Bimbo. Made in Italy, this bronze dog fountain was placed outside of the library in 1912 for passing canines to enjoy a cool drink. Today the fountain is part of the aesthetic beauty of the courtyard.