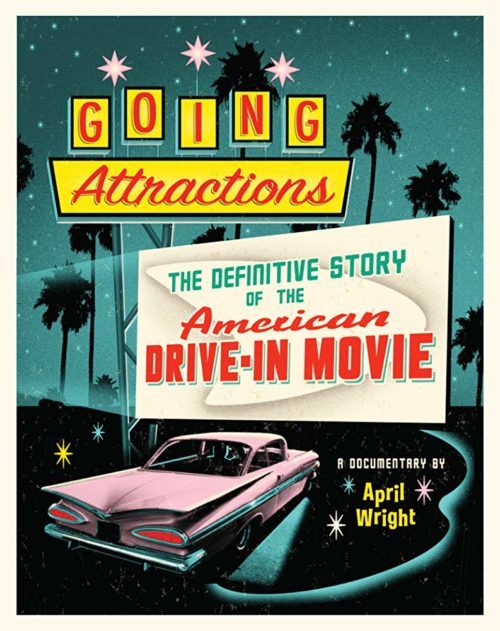 GOING ATTRACTIONS
The Definitive Story of the American Drive-In Movie

Before the advent of home video, one of the most popular ways to see movies was at the drive-in.  Dress comfy, put the kids in their PJs, and take a carload of family and friends out for the night for one nice low price.  Double and triple features were the norm, although sometimes there would be a dusk-to-dawn marathon of five or six films. And, for those brave souls who lasted the night, there would be free coffee and donuts (or maybe even free tickets) given out at the concession stand that morning.  Filmmaker April Wright pays tribute to those “open-air theaters” in her feature-length documentary, GOING ATTRACTIONS: The Definitive Story of the American Drive-In Movie, now available at the Morrisson-Reeves Library.

Using vintage clips of drive-ins across the country, as well as interviews with drive-in owners and filmmakers who specialized in making drive-in movies, GOING ATTRACTIONS gives us a postcard from the past as well as a sneak peek at the future, as drive-ins are once again popping up across the country.  More than just movies, the drive-in was something of a social event. Many drive-ins had swing sets, basketball courts or full playgrounds to enjoy while waiting for the sun to go down and the show to begin.  A few drive-ins had small-scale trains for kids to ride, while others even included small petting zoos. On special occasions like Memorial Day, the 4th of July and Labor Day, some drive-ins even offered fireworks during intermission.  And let’s not overlook the sweets and treats; the concession stands carried everything from coffee to cola, candy to corndogs, as well as popcorn and pizza.

Packed with bonus goodies (including a commentary track), GOING ATTRACTIONS reminds us that sometimes the best part of being at the drive-in wasn’t necessarily what was playing onscreen.  Be it a carload of friends hanging out, or a couple on a date, it was a rendezvous at a special place away from the rest of the world.  Maybe the weather, or your schedule, won’t allow you to jump into your car to watch movies under the stars, but drop by the library and make GOING ATTRACTIONS a coming attraction on your DVD player!