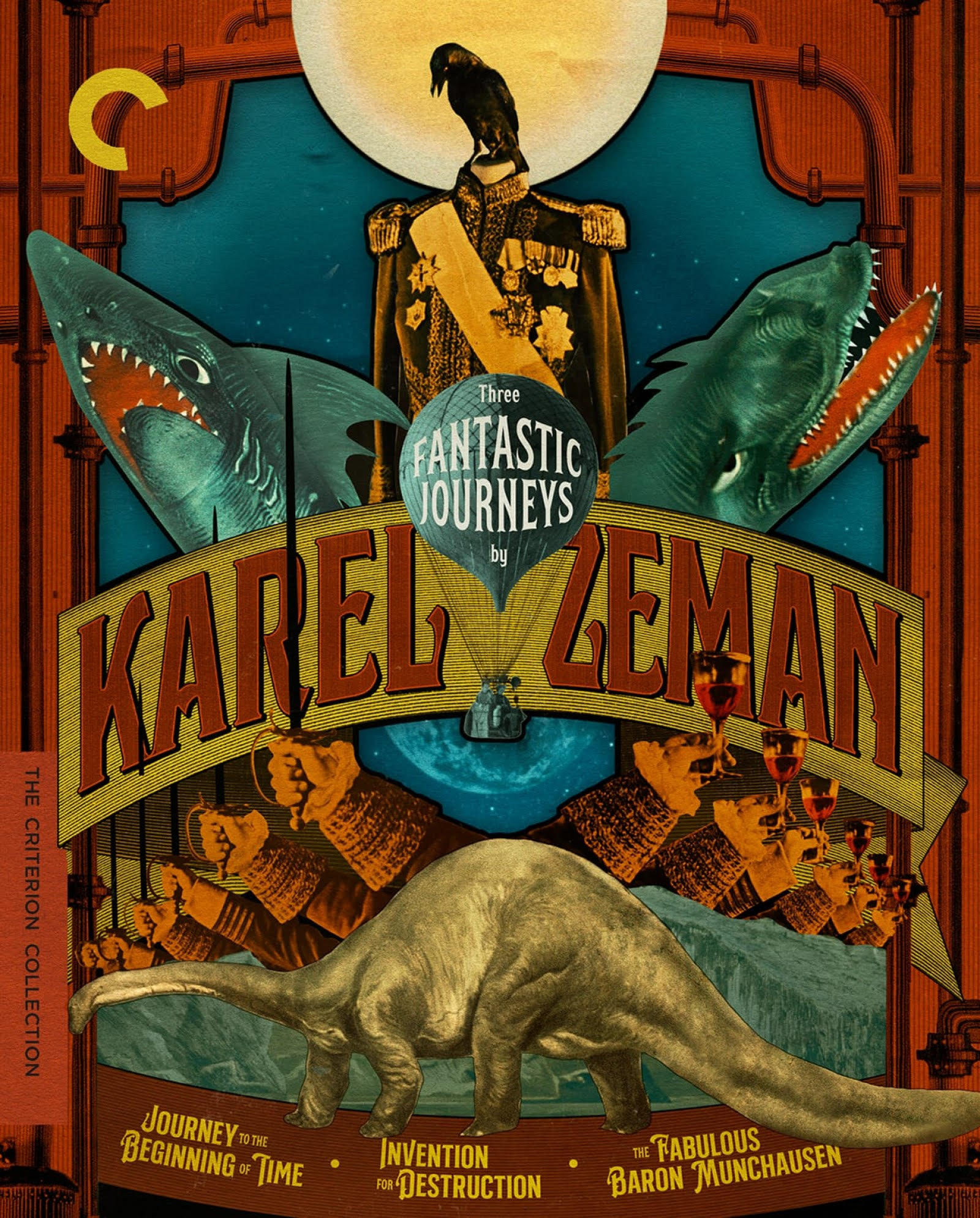 Review written by MRL Staffer, Robert Statzer, August 2022
Link to the movie in the MRL Catalog.

Karel Zeman, like Walt Disney, George Pal and Ray Harryhausen, was fascinated by film and its ability to tell larger-than-life tales.  These four filmmakers never outgrew their life-long love of fantasy, or their desire to give new life to old favorites through the medium of motion pictures.  Although not as well-known as his three cinematic kindred spirits, Zeman was also a master of illusion, using ground-breaking special effects of the day to put the impossible on the screen in a pre-CGI era.

From the Criterion Collection comes Three Fantastic Journeys by Karel Zeman, a multi-DVD set of Zeman’s most imaginative and ambitious fantasy and science fiction films.  Recently restored to give us the best-looking editions ever seen on home video, these are the amazing adventures that influenced the works of Terry Gilliam, Jan Svankmajer and Wes Anderson, among others.

Disc 1 contains what is perhaps Zeman’s most famous film, Journey to the Beginning of Time, in which a group of schoolboys on holiday go boating, only to find their trip down the river is a trip backwards in time when they encounter prehistoric beasts.  The DVD offers viewers an option to watch either the U.S. version of the film that was so popular in theaters and television, or the original Czechoslovakian cut of the film rarely seen in this country.

Disc 2 is Invention for Destruction, a steampunk adventure created before the term “steampunk” was even invented.  Released in the U.S. as The Fabulous World of Jules Verne, we see a Victorian era filled with flying machines and other mechanical marvels.  But not all the amazing machinery inspires awe, as a group of pirates operating from their secret base on a volcanic island terrorize the sea in a submarine that might make even Captain Nemo green with envy.  (This version of the film includes a restored scene not seen since the film’s original release.)

Rounding out the set, Disc 3 gives us The Fabulous Baron Munchausen (aka Baron Prasil), a fictionalized version of the controversial 18th century soldier, adventurer and teller of tall tales, who claimed to have fought a 40 foot long crocodile and taken a trip to the moon.  (In the film, we learn that the Baron has been joined on the moon by yet another legendary adventurer, Cyrano de Bergerac.)

In addition to the feature films, Three Fantastic Journeys by Karel Zeman also includes four of Zeman’s short films; A Christmas Dream, A Horseshoe for Luck, Inspiration and King Lavra.  (Inspiration is unique in that it makes use of animated glass figures, which were heated up between each exposed frame of film so that they could be moved into their next required pose.)  There are additional treats as special effects artists Jim Aupperle (The Thing) and Phil Tippett (The Empire Strikes Back) go behind-the-scenes to discuss how Zeman created some of his movie magic.  Capping it all off is the 2015 documentary Film Adventurer: Karel Zeman, in which directors Tim Burton and Terry Gilliam discuss the impact and inspiration Zeman had on their own careers.

Although the field of special effects has come-of-age in the Digital Age, the hands-on artistry and craftsmanship of Karel Zeman’s innovative and imaginative techniques gave a unique storybook look to his work.  His Old World/Old School artistry and craftsmanship put such a stylized stamp on his work that it has never been duplicated.  Let’s pretend we’re kids again and go on Three Fantastic Journeys by (and with) Karel Zeman!